24 August 2010 Comments
When you stack avis from a monochrome camera it's time to process those stacks - sharpen them and fine-tune before making RGB or LRGB image. The most common sharpening solutions are:

Each method can produce slightly different final color image. Depending on settings or used technique the image may be slightly sharped presenting fine and small details (fluffy) or it can have much more contrast and show bigger details more clearly. It's sometimes good to process the same data with various techniques to bring out everything you can out of it.

You need a good starting point - a good raw stack that won't degrade when sharpening. For DMK21 camera you need at least 1000 frame stack to get good image after processing. More frames will help.

Wavelets are available in for example Registax. You can precisely configure sharpening behavior by setting "power" values for each layer from 1:1 till 6:1. First layer sharpens small details while 6:1 biggest. You have to check & try various settings until you get the best for your image. If the planet is big then you use layers sharpening bigger details. If the planet is small - some of the first layers. The image must be sharp, detailed and not very noisy.

Here is a Jupiter stack made from 5,6 meter focal length: The image is blurry, which is common to all stacked images. It's time to sharpen it, remove some noise, add some extra processing and make a color final image. As this Jupiter is quite big I'll use higher layers of wavelets to sharpen it: There is a big improvement in the sharpness of the image, and the noise isn't big. Using big and good stacks will allow you to use stronger wavelets without adding to much of that pixel noise. Blue channel with the same wavelets will look like this

Ther is a bit more noise, but the blue channel is affected by seeing much more than red. Slight pixelish noise can be removed by slightly blurring the image.

When the image is sharpened we can do two things: Levels allow us to remove gray background noise from the image by moving the left side of the levels to the strong signal of the planet on the image:

Red line shows the slight change in the left level. It will make the background nice and black without the gray noise. Editing levels on the right side allows us to make the image brighter.

Sharpened images, like the blue channel presented before will have some pixelish noise or patterns. To remove this noise we can slightly blur the image. It's quite common thing to do for color RGB channels when making an L-RGB image. Blurring the color channels removes the pixelish noise and the color will be more natural without oddly colored spots and pixels. Blurred blue channel looks like this: Red or even better infrared channel used for luminescence is much less distorted by seeing which generates better stack, which is less noisy after sharpening and may even not require any blurring. Here is a R-RGB image made with wavelets and blurring: 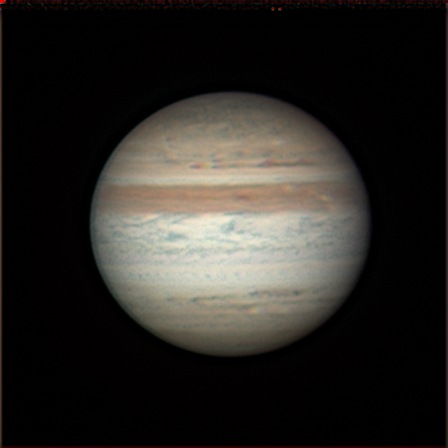 Unsharp mask can be used on raw stacks on blurred images after sharpening with other algorithm. Unsharp mask can very quickly produce a lot of noise, which has to be reduced by bigger amounts of blur so unsharp mask is rarely used for primary sharpening. Here is highly unsharped blue channel: And after some blur (more needed): And here is the result R-RGB image made using unsharp mask and a lot of blur: You can't process the image multiple times. Each sharpening or blurring will gradually destroy the image so limit number of steps to minimum. Multiple sharpening and blurring is not the way.

LRGB gives a lot of advantages over RGB. We can get the details from red or infrared channel combined with blurred, thus noise free cololor channels. Many amateur astronomers use infrared filters like Astronomik Pro Planet 742 (or Pro Planet 804, Baader Ir Pass) to get the infrared luminescence. On bigger focal ratios if the Ir is too dim the red channel can be used (Pro Planet 742 works with DMK21 up to f/20, and on f/28 it's just to dim).

L channel also helps reduce or eliminate slight movement of the planet between channels. If the LRGB stacking algorithm is good it will pull colors to matching details on the L channel.

There are some exceptions where LRGB with Ir or Red luminescence won't give better results than RGB. On Mars such images can have problems with color balance and hide clouds that are visible in the blue channel.