Small, cheap and good cameras for planetary and lunary imaging

Some time ago I reviewed Point Grey Chameleon camera - it's small, cheap and quite powerful. On the machine vision market there is more similar cameras combining relatively low price with good performance. Here is a list of such cameras: 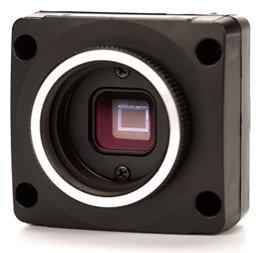 Chameleon is the most known and quite popular, especially for solar and lunar imaging. Having 1296x964 frame it can record at 18 FPS (slightly more with ROI, and around 30 FPS at bin2). The Sony ICX445 CCD has quite good sensitivity and low read noise. The only weak point of this camera is lack of very fast framerate with ROI subframe for planetary imaging. Color and mono versions are available. Price $375 (USA) 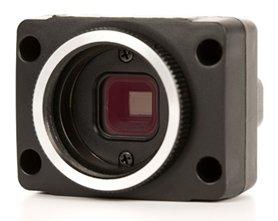 This camera is equipped with CMOS Micron MT9V022 sensor. The frame is small - 752x480, but the camera can record at 60 FPS with full frame. It's a typical planetary camera - small and fast framerate. Sensor QE max (quantum efficiency - sensitivity) is only around 47% so not much, but it looks like this sensor keeps much higher QE in infrared than any other in this comparison. It also has a global shutter which is better than rolling shutter which most CMOS sensors use. First user astrophotos: Jupiter, Saturn, Mars. Both color and mono versions are available, and they are very cheap - price $275 (USA). 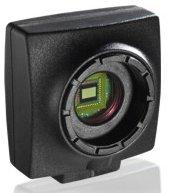 IDS Imaging from Germany isn't known among astrophotographers. It offers various cameras, but haven't been present in amateur astronomy. One of their cameras - UI-1240LE can be quite interesting. It is equipped in e2v CMOS sensor - EV76C560. It has rolling and global shutters, QE max above 60% and a big frame 1280 x 1024 (1/1.8" diagonal). The described here USB 2 version can do 25 FPS on full frame, but there is also GigE version with 50 FPS or incoming USB 3 capable of doing 60 FPS. IDS cameras aren't supported directly by any astro-capture application but SharpCap could detect them through one of Windows interfaces as IDS SDK/Drivers provide a lot of them (as well as their own simple capture application). No test results are available for this camera or sensor yet. Price: 516 EUR (PL).

TIS makes a lot of planetary, lunary and solar cameras from D*K21 to D*K51, but DMK72 is only sold on their machine vision site. It has a 5Mpix CMOS sensor of older generation. It has small pixels, rolling shutter, but quite good sensitivity (QE max is above 60% in blue, much less in IR). Few people did used it for Moon and Sun. At bad seeing the solar images had some linear artifacts (probably due to rolling shutter), but on the other side this camera offers multiple ROI subframe or binning modes (check description). At 640x480 it can do 52 FPS which is nice for planetary imaging. For lunar imaging usually 1600x1200 subframe was used. Although far from perfect in performance it's one of good cameras in its price range - 299 EUR (DE). 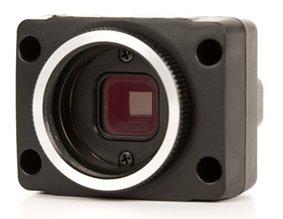 This is a color-only camera equipped with Sony EXMOR IMX035 CMOS sensor. It offers a 1328x1048 frame at 23 FPS. Although it's a newer generation of CMOS sensors it still uses a rolling shutter. If it's a usable sensor time will tell, as QHY is pushing IMG132E equipped with that sensor. Initial images in non-perfect conditions were quite noisy (either due to bad stack, or a generic problem of such sensors). There is no mono version, which would be more suitable for Moon or the Sun. With ROI subframe it can give faster framerates for planetary imaging. Price $325 (USA).