Big sensors were missing in Solar System photography. Big diagonal allows fitting more Moon or Sun on the sensor. That makes imaging easier and quicker. Not so long ago CMOSIS announced big 1" mono sensors. They ended up in many cameras and one of them is Ximea xiQ. It's fast USB3 based camera that can be used for high-end imaging of Sun or Moon. In this article I'll review two models - xiQ MQ042MG-CM and MQ042RG-CM.

The cameras I tested are equipped with a CMOSIS CMV4000 mono sensor with a diagonal of 1" (which is a lot). It offers 2048x2048 frame with 5.5 micrometer pixels. The USB3 interface allows 90 FPS recordings. The two models have different version of the sensor. The MG camera has the plain version, while RG has NIR-extended version with higher IR sensitivity. For 650 nm H-alpha band the QE for standard version is around 54% and around 63% for NIR version.

The camera uses USB3 and to handle big amount of data it must be connected to a good USB3 controller. Intel-based controllers will be ok. If you have a PC you can also use Fresco Logic PCIe controller that can be provided by Ximea. A fast HDD will be also needed. I didn't used a SSD, but a plan WD5000AZRX HDD on a Intel Celeron G840 based computer. I got on average 75-80 FPS speeds, sometimes hitting 90 FPS.

The camera has a standard C/CS thread on the front so any typical adapter for machine vision cameras will work (nosepiece or thread shifter). The camera is very light and small so it will be easy to use with any focuser. The housing is made of metal, so when doing solar imaging a sun-shield would be a good idea.

MQ042MG-CM is priced at 1440 EUR and the NIR version - MQ042RG-CM - 1740 EUR (nett prices). The prices aren't low but also those cameras are very unique - big and very fast mono sensors. Those are specialized cameras for solar (and lunar) imaging. 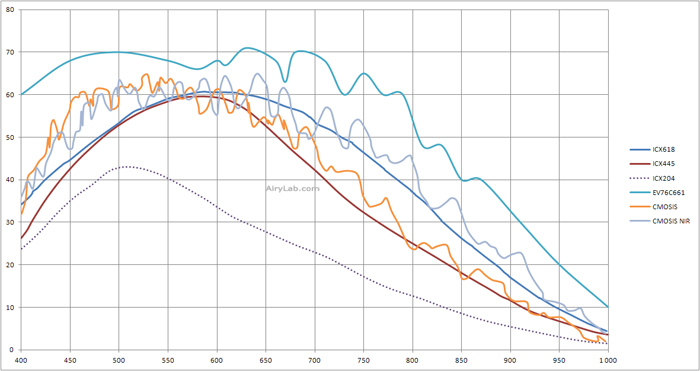 At start you have to install drivers and software provided by Ximea. Aside of drivers there are two handy apps. The viewer (that just auto-displays the image from the camera) and "newCCDtest" application (in Ximea folder installed on the primary HDD) that can record sets of TIFF files as well as change camera settings.

From astronomical applications Ximea cameras are supported by SharpCap. The latest beta have been updated to use the latest xiQ API. In my case I also had to copy m3api.dll to the SharpCap folder for it to start finding xiQ cameras. Note that you have to use SER format for efficient capture (AVIs will be very slow).

Developers can look at the .NET API and also on my IronPython script. You just have to set System.Drawing.Bitmap size to 2048, 2048.

Big sensor can fit a lot of Moon or Sun surface. The first one is easy to mosaic (although time consuming), while the second is much harder. The image quality given by the CMV4000 is very good. Moon and Sun are bright so the gain is lowest and exposure time short. On high gain and longer exposures noise will show up. Some typical CMOS spatial noise - vertical lines could became visible. For a single-stack solar telescope the standard version would be good, but for very narrow or double stacked I would advise NIR-version.

When doing test images it looked like the NIR version had lower noise. After that I made some dark and bias frames (100 frames stacked, max gain, 30 ms exposure for dark) and it turned out that the NIR camera has something like high black level as there was no background noise (only few weak pixels). The standard version gave standard: dark and bias frames (those are stretched a lot).

Micron/Aptina CMOS sensors are very prone to gave strong Newton rings on H-alpha solar images. This is from the cover glass that has some optical defects. CMOSIS sensors in those two cameras didn't show any sign of such un-removable rings.

The cameras can also photograph planets when using smaller subframes at some good level.