Astrophotographers all around the world are using various cameras to photograph Moon, Sun, planets or deep sky objects like nebulae, galaxies, star clusters (DS objects for short). Planets or Sun and Moon are bright and are imaged at high resolution and short exposures. DS objects require usually multiple minute exposures (even 30 or more for extreme cases) and are imaged at relatively low resolution.

Amateur astrophotography started long ago when Philips webcams - Vesta, Toucam, SPC900 became widely available. At that time they were unique - with a Sony ICX098. Those webcams were quickly adapted for planetary imaging, and after hacking the electronics - for long exposures needed for DS imaging...

Nowadays there are dedicated cameras for every type of astrophotography, astronomical spectroscopy or photometry. So called "amateurs" usually want to get a good image of given objects. They don't use the most advanced and most expensive equipment available. Sometimes they hunt for cameras not designed initially for astrophotography of any kind.

This quite long news is dedicated to image sensors designers, cam makes and other people out there that have something to do with imaging. The goal is to help flow new technologies and new sensors from the "industry" to astrophotography, as well describe basic types of astrophotography to the industry. 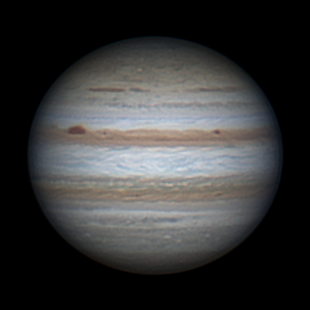 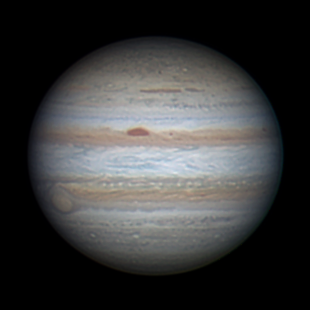 Jupiter images made with Basler Ace acA640-100gm. Around 2000 frames per R,G,B channel, around 3000 frames for luminance channel.

Types of cameras and astroimaging cases

Planetary imaging (Moon and Sun too) nowadays uses "machine vision" cameras - like The Imaging Source USB2 DMK/DBK/DFK21AU618 with ICX618 Sony CCD or Point Grey Chameleon with ICX445 (and also some webcams - like MS LifeCam with OmniVision sensors or SPC880NC with ICX098). There are also other cams like QHY5 guide cameras equipped with Aptina/Micron CMOS sensors, but they are less efficient at such imaging (especially those with rolling shutter may have problems). Exposures usually don't exceed 40 ms (or even less). They can't be longer as air movement ("seeing") would blurr the image. Even at short exposures air turbulence, air currents may spoil the imaging - thats why fast machine vision cameras are used. Up to few thousands of frames is recorded and then astronomical software like Registax or Autostakkert grade each frame for quality and stack best frames into one image with much better SNR. Capture total time is also limited by planet rotation (for Jupiter this is very short window of few minutes).

Deep space imaging is quite different from planetary imaging. There is no time limit for the capture, the resolution is much lower and air turbulence (seeing) usually has no effect on the images. The challenge is usually very low brightness of imaged objects. Exposure may last for many minutes. That makes dark current a major factor. All DS imaging cameras are peltier cooled to limit dark current effect. Also dark frames are taken to remove hot pixels and/or amp glow from the final image. Also nearly all cameras for this work are made by dedicated companies like Atik, SBIG, QSI, FLI, APOGEE, StarlightXpress and more. Also in DS imaging multiple images are stacked - but only few. 14 frames of 10 min exposition stacked can give such final image of the Pleiades:

UV isn't used much for imaging. Only Venus is imaged through UV bandpass filters. A lot of photometry is however done in UV, but that's a different story. In visual wavelengths nearly all astronomical objects can be imaged. Nebulae however are usually imaged with narrow bandpass filters as they emit light only at specific wavelengths. In infrared there is H-alpha and [S II] band in those nebulae. Also Moon or planets look good in IR as longer wavelengths aren't affected by bad seeing as those shorter ones. So usually higher red/IR sensitivity is important. Mono cameras are used more often, especially for imaging with narrow filters. 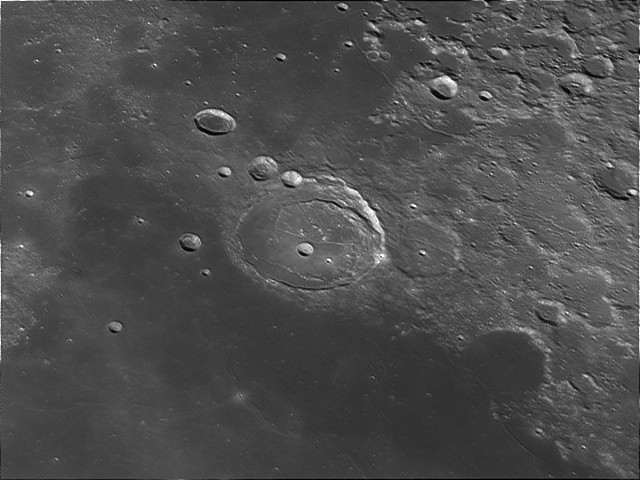 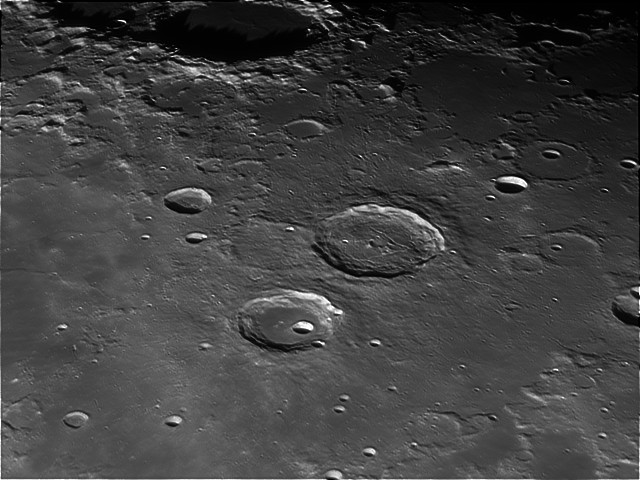 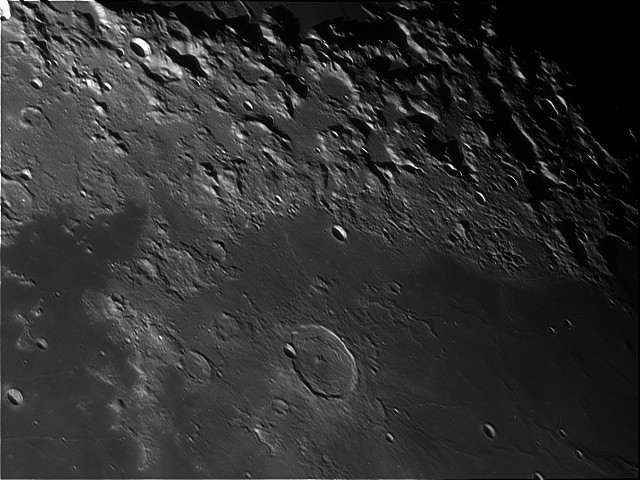 So called "planetary cameras" can even use small 330kpix sensors like ICX618 (or ICX098 before) - even very big mass made telescopes can't make planets bigger than this 1/4" diagonal can handle. For Lunar or Solar imaging more pixels is handy, but not to much or the framerate via USB2 will be limited to much. ICX204, 205, 274, 445 are used in such cameras. Some photographers also use GigE Basler Ace cameras, or Firewire 800 Point Grey Flea 3 cameras. Those can provide faster framerates. Key element for those cameras is low read noise and no artifacts. Older cameras with Sony CCDs providing framerates higher than those described in the public PDF sheets usually show "circular artifacts" on planets. Newer designs like Basler Ace doesn't have them but still can have randomly occurring similar artifacts (link 1, link 2). Speed of around 60 FPS is ok, more isn't needed.

DS cameras have 16-bit A/D converter, Peltier cooling and don't provide fast framerates - they are optimized for long exposures. Some of them uses Sony CCDs like ICX285, but those bigger/better use Kodak KAF/KAI sensors like quite popular KAF-8300. Among color cameras big Sony CCDs are the most popular - ICX413AQ, ICX453AQ and alike in QHY cameras.

EMCCD or sCMOS aren't used nearly at all. High price prevents wider usage of such sensors. There are few DS images made with Andor Luca - junior-ccd.fn-f.de or Jupiter methane band images made with Merlin Raptor EMCCD (in methane band at 889 nm Jupiter is very dim due to methane absorption. EMCCD helped to maintain short exposure for a high resolution image).

In DS imaging list of companies making good DS cameras is rather fixed and limits usually to companies making dedicated astronomical cameras. For "planetary" imaging for some reason there is no dedicated company or companies. Machine vision cam makes are taking this segment. TIS boxes their standard cameras - with a C-mounted nosepiece and software. Point Grey opened an online shop to allow easy shopping (you buy one camera, not a box of cameras here). Basler got some attention too, mainly in Europe/Germany. New cameras and new companies may try to enter this market. For such companies astronomical usage brings also a lot of links and pictures in search engines (like Google) ;) DS cameras can also be interesting - especially if cheaper than those already available.

In planetary imaging there is always a need for more sensitive and/or less noisy sensors. There are already first users of Point Grey cameras with ICX674ALG, and e2v Ruby/Sapphire CMOS sensors should be tested in upcoming months. CMOSIS CMV4000 with a big diagonal is interesting for solar imaging using H-alpha scopes. Laptop-friendly GigE and USB3 cameras with those sensors are quite rare - Basler Ace or Ximea cameras are expected somewhere Q1 2012.

In DS imaging cameras - new Sony CCDs are the hot new stuff. ICX674ALG cameras (Atik) are already on the market and ICX694ALG are announced. There seems to be no new Kodak/Truesense sensors for DS cameras at this time.

CMOS in high-end astrophotography will have a hard start. From years "CMOS" was described as the bad, poor, crappy sensor put in "useless" cameras. Now for many people it's hard to explain that CMOS isn't always a bad thing. There are new CMOS designs, but decreasing pixel size problem arises. Astro cam-makers are also conservative. Makers of high-end cameras like SBIG, QSI, APOGEE like Kodak or e2v sensors (big full frame mono best) and they usually don't even want to hear about Sony CCDs. CMOS are totally out of the equation I think... Companies that make cheaper cameras like Atik or QHY seems to be more open to the CMOS possibility in DS imaging. But which sensors could be used? Like CMOSIS have big mono sensors, but designed for fast framerates.