The Lost Vikings, or TLV for short are one of those unique and high skill cap heroes you can pick in Heroes of the Storm. How do you play with three mini-heroes at once?

In this article I'll introduce The Lost Vikings as Heroes of the Storm heroes and showcase my Vikings playstyle, which may be good on it's own or a way to learning 3-lane micro-management playstyle.

We get three Vikings and each one has unique abilities:

So we have a tank, a specialist and a sniper. They can work together but the meta way to play them is to actually split them and operate in multiple places at once. That requires a lot of micromanagement and game awareness. This is why many people see TLV as the hardest, most demanding heroes to play.

At the moment Vikings aren't very strong. Their high win ratio is mostly due to low amount of new players versus old and experienced playing them. TLV are high risk - high reward type of heroes and the skill cap is very hight for a reason.

You can control single Viking by selecting him or by picking 1, 2 or 3 on the keyboard 4 is for all. You can also select two of them. Vikings don't have a mount but their Z ability makes them move faster for a short period of time. The bigger the Viking, the slower he will be.

If you have a Viking on every lane within dying minions range you collect all the minion experience that can be collected. That's the main advantage of having Vikings on the team - provide high level advantage that will crush the enemies. But that doesn't always work as the enemy may start finding and killing Vikings - which may be easy if you are not paying attention ;)

As an Abathur player I had at least few games against TLV that were aggressive on the passive and hidden soaking. Even with bush shooting to find them they collected so much experience that I couldn't match. But in the end - one good late team fight and the advantage may be gone. TLV win if they don't allow late game.

If the lane is taken by your team mates you don't have to keep a Viking there as no matter how many heroes are in range of minions - the amount of experience you can get is fixed.

There are however other ways you can play Vikings. Instead of somewhat passive gameplay you can use them as a group. This doesn't require splitting your attention on multiple lanes, and as a group (still micro managed a bit) you can and have to do much more than casual lane pushing and soaking. One Viking isn't strong, but as a group they can win a lane against many heroes when one vs TLV. With some talents they can be good at offence in team fights. They won't be Illidan, but still with good management they can stun, hit and snipe heroes, tank some damage with Olaf, rush with Longboat and more.

Vikings can be on multiple lanes and can easily take camps

TLV can pretty much turn off Murky early game. In mid and late game Murky can still keep dying where as TLV can't and that's make them harder to play.

As a disclaimer - I'll show my idea on playing Vikings. I do that on Quick Matches so with random teams and often against a bazylion of assassins like Li Ming, KaelTas, Nova or Zeratul. And it still works ;) 58 games with 55,2% win rate isn't bad. Experienced TLV players with experienced team mates may achieve more by using established best strategies, that they mastered with their godly micromanagement.

So if you play as a group what should and can you do? Lets start with general gameplay options:

Vikings can solo a temple with ease

TLV can control a lane against some if not many heroes, even Azmodan. The key is to be very mobile, do a back and forth attacks so that Baleog splash damage does it job and tank with Olaf

Vikings can allow efficient splits when taking seeds, dragon shrines or even to some extent - bosses. TLV + one DPS seems quite efficient

Longboat is an escape and offensive ability at the same time. You buy some time and do damage.

Team fights, securing map objectives is something TLV should participate if they can. You can't rush on the first line, but you must be there to help when needed. With proper talents and dodging Vikings can actually be useful.

Vikings have normal respawn times so they shouldn't die completely mid/late game. When you take the The Sequel! some kill-trading is ok. If you are low on HP with cooldowns with no healer - leave TF and go to lanes/camps.

Large and In Charge makes Olaf jump and stun an enemy. That's a superb gank and surprise attack

Vikings look like easy target. This can be used to bring fresh meat to your friends.

Vikings with Longboat and stun can spread havoc quite nicely

Here is my talent pick:

Zeratul, Nova, Li Ming, KaelThas and others aren't that bad for Vikings. Yes, they can annihilate them, but it's your responsibility to keep them safe ;) And it's actually doable. Check some of my end game results. Playing QM usually ends up in assassins teams so you will have a lot of games to practice... 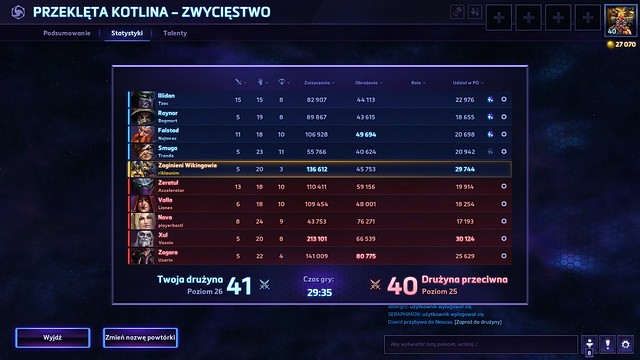 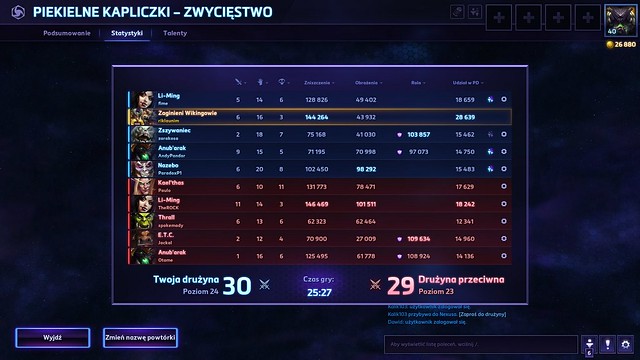 On Intel-based Apple devices it was possible to run old WoW clients through the Wine translation layer. With Apple Silicon and the removal of 32-bit executable support this is no longer possible, but thanks to Microsoft and Parallels there is an alternative.

Final Fantasy XIV does support macOS but the game version isn't native to macOS not to mention Apple Silicon. It's pretty much a Windows version run via Wine wrapper. How does it perform on Apple M1 and how much performance is being lost?

Resolution and graphics quality scaling in WoW for Apple M1

Apple silicon is quite capable and even the base M1 can run WoW pretty easily if you keep the settings a bit down. Let's see how performance scales with resolution and quality settings in Dragonflight pre-patch.

WoW Dragonflight PTR and Classic on Windows on ARM devices

There are few Windows on ARM devices with Qualcomm ARM CPUs plus a few user-converted Android phones or tablets. Those are mostly higher-power variants of mobile phone chips so the performance isn't great but at least the devices are fanless and have quite long battery life. Let's see how they handle ARM-native WoW.

Last year I've tested FF14 on AMD integrated graphics and now I've managed to put Ryzen 4800U against Intel i7-1165G7. There is a quite large stock of cheap existing or refreshed laptops with such chips so the question is - can they run Final Fantasy XIV decently? Lets find out ;)

World of Warcraft on AMD, Intel and Apple integrated graphics

Last year I've tested AMD integrated Vega graphics in mobile and APU based devices and now I've managed to put Ryzen 4800U against Intel i7-1165G7. There is a quite large stock of cheap existing or refreshed laptops with such chips so the question is - can they run WoW decently? Lets find out.