Year 2013 is getting close and it will bring new cameras and new sensors for Solar System imaging. The machine vision market is evolving very quickly bringing new cameras, better performance and lower prices. Few years ago Lumenera were the best cameras and now they are becoming a part of the history - replaced by newer cameras. Around two, three years ago Sony ICX618 sensor made a big change in planetary imaging. DMK21AU04 became old and not interesting in favor to new ICX618 based cameras. 2013 will quite likely bring similar changes and, or new alternatives.

In 2013 we can expect latest generation of CMOS sensors entering Solar System imaging as a top class cameras. Sony CCDs will be strong too bringing new models with even better performance. Some cameras however will get bit to old to be a valid buy from the shop.

In this article I'll write about the incoming new hardware as well as older cameras that are starting to show their age making their price/performance ratio quite uninteresting.

e2v company may be known from their advanced imaging cameras used in space probes and by professional observatories. Those are their expensive CCDs. But in our case it's all about e2v CMOS sensors. There are two lines - Sapphire and newer - Ruby line. Those sensors are entering Solar System astrophotography as we speak.

Quite big diagonal (1/1.8"), quite good sensitivity and global as well as rolling shutter make those sensors useful at astrophotography. Sapphire sensors are also quite cheap allowing cheap cameras to be developed. I've tested IDS Imaging UI-1245LE-M-GL, and Ximea xiQ MQ013MG-E2 and they are working and they do allow to take really good Solar System images. Point Grey announced Blackfly camera with the same sensor at a very attractive price. EV76C560 sensor is becoming very popular.

What makes cameras with this "sapphire" sensor so interesting? Flexibility to do planetary as well as lunar/solar imaging with one cam; low price even for USB3/GigE cameras; quite good performance (between the old and the latest cameras). TIS DMK31/41/51 can't do planetary imaging very well (low speed and no ROI with faster framerate support)... and they cost more! 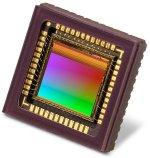 Ruby line went into production in 2012 offering two sensors - EV76C661 with global/rolling shutter and 70% QE max (sensitivity), and EV76C660 with rolling shutter only and whooping 80% and very low read noise (~3e). The global shutter is better, but harder to do for CMOS sensors (rolling shutter may cause artifacts if the imaged object shakes/moves to much due to seeing).

I wrote about those sensors when they were announced and now the *61 sensor got tested by Airylab. First users are posting images taken with their new cameras. The EV76C660 isn't announced in any camera yet (rolling shutter isn't liked any more?), but in good conditions it would work with no problems providing unbeaten sensitivity and lowest noise (in theory).

Thanks to such extremely sensitive sensors it's easier to do plain RGB imaging (with either lower gain or shorter exposure). Also as they are very IR-sensitive imaging in IR is easier, like the methane-band imaging. Year after year the same telescopes give better images due to better cameras.

At the moment the Ruby line sensors are available in IDS Imaging (USB2, USB3, GigE) cameras, which are supported by FireCapture and Genika (Airylab) applications. 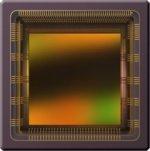 CMOSIS sensors are hot stuff on the machine vision market, but they still didn't showed up in USB/GigE/Firewire cameras (CameraLink only). However first usable cameras (Ximea xiQ USB3) are starting finaly to be available. CMOSIS sensors can be very big and mono. They also have global shutter and quite high sensitivity (QE max at around 68%). The CMV2000 and CMV4000 had 2/3" and 1" diagonal size. Big diagonal allows catching the whole Sun (or most of it) when used with Solar Scopes (even those bigger ones). That's the niche for big CMV sensors.

For a CMV4000 based camera we will have to pay around 1500-1800 EUR so it won't be mass used (you don't need 1" diagonal that much for lunar or planetary imaging). Good HDD capable of saving big amounts of data will be needed too.

The CMV sensors will be good only if test will turn out good and show no artifacts when used with solar scopes (horizontal or vertical bands, affinity for strong non-removable Newton rings like in Micron CMOS sensors). First tests are already available - astrochonum.com.

At the time of writing this article Ximea marked their xiQ CMV4000 camera as available. IDS Imaging announced their CMV cameras, while Basler should have their GigE CMV cameras available.

Sony however also makes a lot of high class CCDs. The ICX618 sensor make a big change in planetary imaging, while ICX445 refreshed lunar/solar imaging. Later one some photographers went to bigger and better ICX674/ICX694, but at a high cost.

In 2013 we will see two new interesting sensors - ICX692 (EXview HAD II) and ICX693 (Super HAD II). At the moment only color sensors are in production, but mono are announced - announced also in Point Grey Blackfly cameras. By analyzing the spec sheets for color sensors we can estimate that those sensors may have QE max somewhere between 70-80%. To confirm that someone must get the mono sensors and do some measurements (Point Grey quite likely will).

We have to wait and see what those two new sensors will bring. They look very promising and as they are intended for very big mass market they won't be/shouldn't be so expensive as the bigger ICX sensors.

The Imaging Source is getting older

TIS cameras like DMK31, 41 and 51 are popular, and they work as they should. However other companies that are bigger are evolving their products rapidly creating cameras that offer more at similar or lower price. EV76C560 based cameras cost less than any of those cameras while they can offer USB3 or GigE interface, as well as support for fast framerate ROI and so on. Price/performance ratio is starting to look very poor when compared to those cameras or to Point Grey Chameleon.

In the machine vision portfolio TIS also has true GigE cameras with sensors like ICX445 or ICX618. I got some feedback from a user that uses one of those cameras for Solar imaging and he reported about artifacts at highest framerates - so those GigE cameras also won't solve TIS "problems" of aging cameras.

Micron/Aptina CMOS sensors loosing in entry-level branch... but ASI120MM is on a rise

There are very good QHY5 guiders based on Micron/Aptina CMOS sensors. Also NexImage 5 cameras use a color Micron sensor. Those are relatively old designs with rolling shutter and lots of read noise. Only some smaller sensors offer global shutter. Even with sometimes high sensitivity the noise (and sometimes artifacts) make those sensors less suitable for Solar System imaging.

Old QHY5 line had problems with short exposures. The new QHY5 II line should address those issues, but still posted images give mixed results. Some artifacts or grainy noise is still present.

zwoptical ASI120MM seems to be much better - in terms of electronics and image quality. It's not very cheap, but cheaper than anything new with nice Sony CCD od Ruby-line e2v CMOS sensor. Definetly a good product in the "entry level" branch. As other Micron CMOS sensors it may not be good for Solar H-alpha imaging (due to very strong Newton rings given by the sensor cover glass).

It's also worthy to write about cheap cameras on ebay. At the time of writing this article we have a massive sale of mono Point Grey FireFly 0.3 camera, that is a hit among photographers beginning their planetary imaging adventure (cheap as webcam mono camera). There are also cheaper Chameleon cameras (brand new) and usual used cameras showing from time to time.
RkBlog